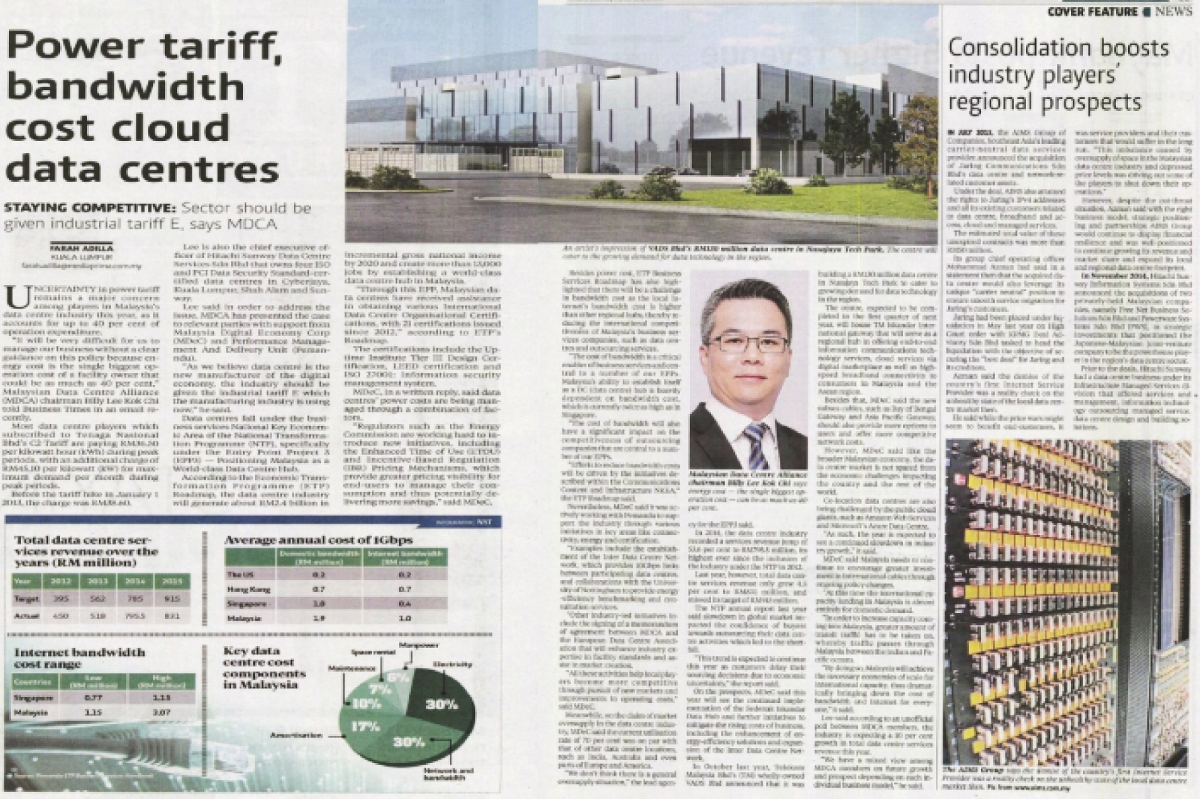 KUALA LUMPUR: Uncertainty in power tariff remains a major concern among players in Malaysia’s data centre industry this year, as it accounts for up to 40 per cent of operation expenditure.

“It will be very difficult for us to manage our business without a clear guidance on this policy because energy cost is the single biggest operation cost of a facility owner that could be as much as 40 per cent,” Malaysian Data Centre Alliance (MDCA) chairman Billy Lee Kok Chi told Business Times in an email recently.

Lee said in order to address the issue, MDCA has presented the case to relevant parties with support from Malaysia Digital Economy Corp (MDeC) and Performance Management And Delivery Unit (Pemanndu).

“As we believe data centre is the new manufacturer of the digital economy, the industry should be given the industrial tariff E which the manufacturing industry is using now,” he said.

According to the Economic Transformation Programme (ETP) Roadmap, the data centre industry will generate about RM2.4 billion in incremental gross national income by 2020 and create more than 13,000 jobs by establishing a world-class data centre hub in Malaysia.

“Through this EPP, Malaysian data centres have received assistance in obtaining various International Data Centre Organisational Certifications, with 21 certifications issued since 2012,” according to ETP’s Roadmap.

MDeC, in a written reply, said data centres’ power costs are being managed through a combination of factors.

“Regulators such as the Energy Commission are working hard to introduce new initiatives, including the Enhanced Time of Use (ETOU) and Incentive-Based Regulation (IBR) Pricing Mechanisms, which provide greater pricing visibility for end-users to manage their consumption and thus potentially delivering more savings,” said MDeC.

Besides power cost, ETP Business Services Roadmap has also highlighted that there will be a challenge in bandwidth cost as the local Internet’s bandwidth cost is higher than other regional hubs, thereby reducing the international competitiveness of Malaysia’s business services companies, such as data centres and outsourcing services.

“The cost of bandwidth is a critical enabler of business services and central to a number of our EPPs. Malaysia’s ability to establish itself as a DC (data centre) hub is heavily dependent on bandwidth cost, which is currently twice as high as in Singapore. “The cost of bandwidth will also have a significant impact on the competitiveness of outsourcing companies that are central to a number of our EPPs.

“Efforts to reduce bandwidth costs will be driven by the initiatives described within the Communications Content and Infrastructure NKEA,” the ETP Roadmap said.

Nevertheless, MDeC said it was actively working with Pemandu to support the industry through various initiatives in key areas like connectivity, energy and certification.

“Examples include the establishment of the Inter Data Centre Network, which provides 10Gbps links between participating data centres, and collaborations with the University of Nottingham to provide energy -efficiency benchmarking and consultation services.

“Other industry-led initiatives include the signing of a memorandum of agreement between MDCA and the European Data Centre Association that will enhance industry expertise in facility standards and assist in market creation.

Meanwhile, on the claim of market oversupply in the data centre industry, MDeC said the current utilisation rate of 70 per cent was on par with that of other data centre locations, such as India, Australia and even parts of Europe and America.

“We don’t think there is a general oversupply situation,” the lead agency for the EPP3 said.

In 2014, the data centre industry recorded a services revenue jump of 53.6 per cent to RM795.5 million, its highest ever since the inclusion of the industry under the NTP in 2012.

Last year, however, total data centre services revenue only grew 4.5 per cent to RM831 million, and missed its target of RM915 million.

The NTP annual report last year said slowdown in global market impacted the confidence of buyers towards outsourcing their data centre activities which led to the shortfall.

“This trend is expected to continue this year as customers delay their sourcing decisions due to economic uncertainty,” the report said.

On the prospects, MDeC said this year will see the continued implementation of the Sedenak Iskandar Data Hub and further initiatives to mitigate the rising costs of business, including the enhancement of energy-efficiency solutions and expansion of the Inter Data Centre Network.

In October last year, Telekom Malaysia Bhd’s (TM) wholly-owned VADS Bhd announced that it was building a RM130 million data centre in Nusajaya Tech Park to cater to growing demand for data technology in the region.

The centre, expected to be completed in the first quarter of next year, will house TM Iskandar International gateway that will serve as a regional hub in offering end-to-end information communications technology services, cloud services via digital marketplace as well as high-speed broadband connectivity to consumers in Malaysia and the Asean region.

Besides that, MDeC said the new subsea cables, such as Bay of Bengal Gateway and Asia Pacific Gateway, should also provide more options to users and offer more competitive network costs.

However, MDeC said like the broader Malaysian economy, the data centre market is not spared from the economic challenges impacting the country and the rest of the world.

Co-location data centres are also being challenged by the public cloud giants, such as Amazon Web Services and Microsoft’s Azure Data Centre.

“As such, the year is expected to see a continued slowdown in industry growth,” it said.

“At this time the international capacity landing in Malaysia is almost entirely for domestic demand.

“In order to increase capacity coming into Malaysia, greater amount of transit traffic has to be taken on, whereby traffic passes through Malaysia between the Indian and Pacific oceans.

“By doing so, Malaysia will achieve the necessary economies of scale for international capacity, thus dramatically bringing down the cost of bandwidth and Internet for everyone,” it said.

Lee said according to an unofficial poll between MDCA members, the industry is expecting a 10 per cent growth in total data centre services revenue this year.

“We have a mixed view among MDCA members on future growth and prospect depending on each individual business model,” he said. 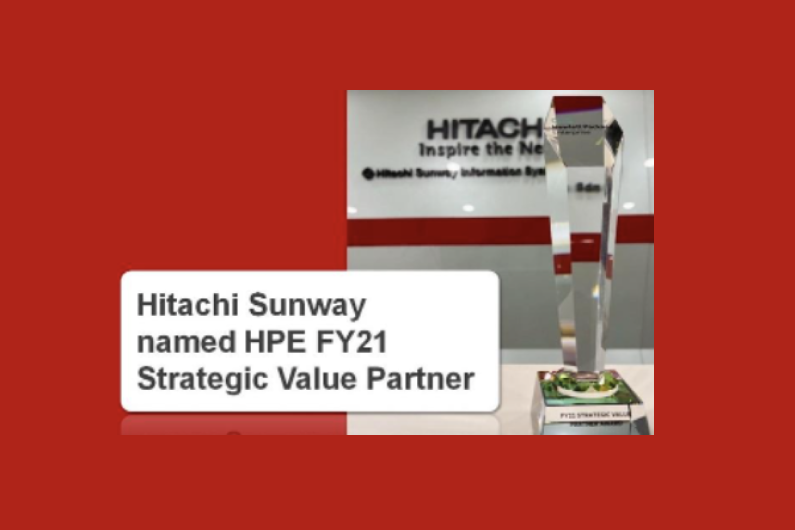 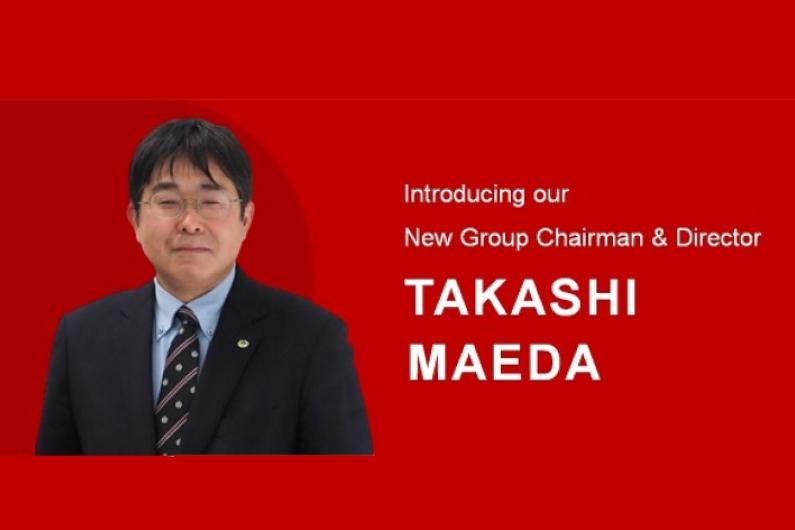